By now, many people have heard that Tropical Smoothie Cafe now carries Beyond Meat, a gluten-free and vegan chicken alternative. This is huge news and a win for vegans and chickens everywhere! But now, what ELSE is vegan at Tropical Smoothie? (Other than the non-dairy smoothies, of course.) Well, Compassion Over Killing compiled this list of what's vegan, making it easier for anyone to stop in and get a Beyond Meat wrap or salad, without any other cruelty.

Or build your own out of vegan ingredients.

Have you tried Beyond Meat at Tropical Smoothie Cafe yet?
Posted by Amanda J at 7:55 AM 37 comments

The weather in beautiful Tampa Bay, Florida, has been much warmer than I would expect for this time of year. I'm not asking for "winter" (HELL NO), but I want cardigan weather, dammit!

I'll always rather be hot than cold, though. Always.

I don't do much celebrating for Christmas, but you know what warms my heart? Palm trees decorated in holiday lights. Gets me every time.

"The first vegan wedding in India" - Congrats to the compassionate couple!

Wow! Nomadic Matt shares this profile of a 22-year-old who saved $18k to travel the world! Color me inspired.
"I remember when you said one of the most brilliant things ever: “Everyone says I’m running away.” If only they knew, right? Yeah, you’re running away from fear and absurdity, but unlike the people who tell you this, you’re the one embracing your life."

BIG CONGRATS to Jasmin and Marianne of Our Hen House on expanding into a FULL ONLINE MAGAZINE! It looks amazing!

Whether you're a fancy pants photographer or you just like goofing around with a camera or your iPhone, check out Photojojo. They have really fun camera gear, plus they share really cool photo project ideas.

Speaking of photography, check out the "Metropolis" project by Martin Roemers.
“I am taking photographs of crowded places where you notice not only the city’s dynamic character but also the individual making his way in the big city. Specifically, I’m looking at the small stories of the street vendor, the commuter, the passer-by, the market stallholder and other pedestrians who populate the street or are a part of the traffic. I present this by photographing busy locations from above,” Roemers wrote in his article for the New York Times back in May.

Speaking again of photography, do you have a stellar shot from your travels? Contiki Vacations is looking for fabulous photos for their brochures. If you have a pic worth $500, enter their One Life. One Shot! Contest.

This man be cray-cray:
In what is probably the longest, most arduous piece of reportage ever undertaken, Paul Salopek, an experienced writer for the Chicago Tribune and National Geographic, is embarking on the astonishing task of retracing the journey taken by early man tens of thousands of years ago.

Beginning in the exotic surroundings of the Great Rift Valley in Ethiopia, Salopek will take an estimated 30 million steps, reaching his destination seven years later, three continents away at the most southerly point of South America.

And finally, check out this easy no-peasy video from my blogger buddy, Jaime, of Save the Kales! She whipped up some almost-raw vegan pizza dip for Veg News TV.

Over the summer, my pal, Lisa and I were determined to get ourselves to a legit sushi joint. Somehow, I had never gotten proper sushi since moving to Tampa Bay. I'd only picked up sub-par rolls last minute from Whole Foods, Publix, or Greenwise. Their sushi is decent, but nothing to write home (or blog) about.

I set to the Googles and did an exhausting search of veggie-tastic sushi menus in our neck of Tampa. I finally settled on Samurai Blue in Ybor City. Let's go!

Lisa started out with a cup of miso soup. 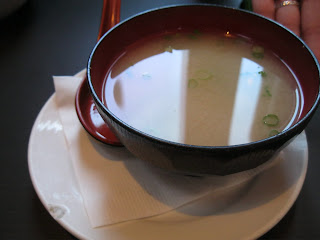 And we split a large salad. (This was just my portion!) The ginger salad dressing was fab! 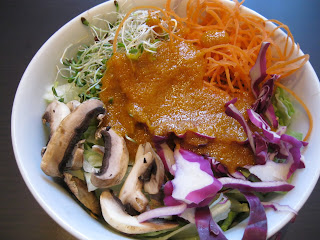 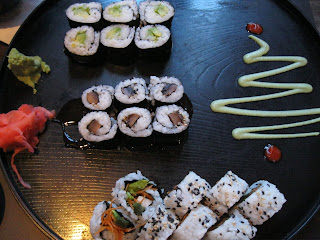 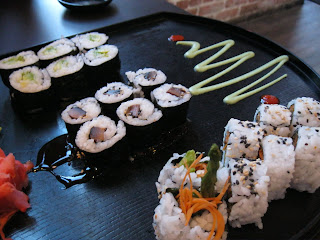 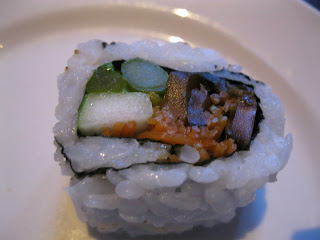 The veggie roll wasn't as flavorful as I was expecting from so many vegetables packed into one little space. Lisa and I ended up splitting another avocado and shitake roll.

The atmosphere in Samurai Blue is small and trendy but comfy. High ceilings, brick walls. They were playing some pretty great music (in my opinion - alt-rock and some indie) and the service was great. Our server was very friendly and helpful with answering some questions we had about the menu.

About a month later, a gaggle of us went to Soho Sushi after a long, sweaty day at Tampa Bay Veg Fest. I didn't take any pictures (it was a long, long day), but the sushi was great! The restaurant is much larger than Samurai Blue. Soho also offers habachi fun. I can't remember what rolls we ordered, but everything was really good and fresh. I would definitely return to Soho Sushi!
Posted by Amanda J at 11:40 AM 6 comments 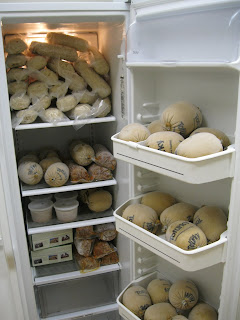 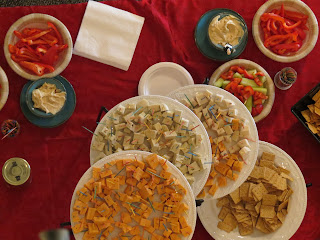 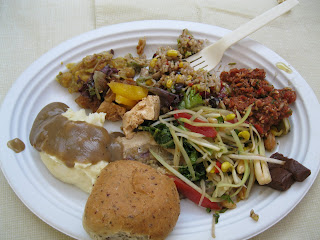 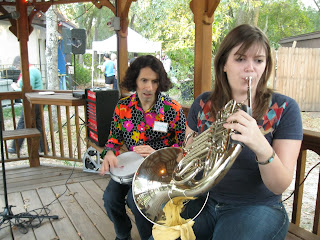 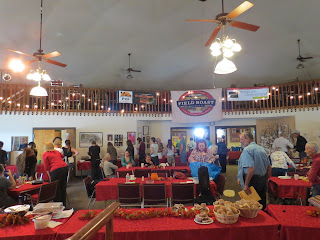 Since you're already scouring the interwebs for Cyber Monday deals, why not take a break and check out these fun links?

Planning a trip to Sweden any time soon? A fellow hungry vegan traveler sent me the link to this sweet Google Map she created, highlighting all the veg-friendly spots.

via Smaggle, Edenland also toured India. What an experience!

Hobo Siren is schlepping around the some countries. (Love the pic of her with the camel.)

Travel the world? The whole world? This article from The Onion tells us to calm down a bit and rethink a minute.

I like WTF Should I Do With My Life? But this guy? Not so much.

Ugh, I want THIS to be my life RIGHT NOW!

For my snowy-weathered-friends, Mackenzie wrote this nice piece on wintertime bicycling at her blog, Whatever Gatsby.

And now this, just because.


"If I had my life to live again, I'd make the same mistakes, only sooner." — Tallulah Bankhead

In short: not much.

My cousin and her family happened to be in Orlando this week. On a night that worked out for all of us, we met up for dinner at a TGI Fridays near Disney, where they were all staying.

Naturally, this would not be my first choice, but I cared more about visiting my badass cousin than eating anything fancy. However, it was my cousin who chose it (in a rush), and she has a list of food allergies. We were in for a treat!

As soon as we were seated, my cousin asked for the gluten-free menu. The server handed her an allergen menu, which was handy for me, too. This menu listed everything that was in everything: dairy, eggs, shellfish, wheat, soy, etc. I should have taken a picture of this menu. Each allergen was listed as a symbol, and hot damn, almost every menu item had multiple symbols next to them. Even their hummus platter (which you would assume would be vegan minus the dollop of bullsh*t yogurt sauce on top) contained shellfish! My cousin and I wondered if TGI Fridays was just covering their arse extra, to be safe (even all of their fries were listed as containing wheat, dairy, eggs, shellfish, etc.), but we had an inattentive server, plus it was pretty busy, so we didn't pull out our food detective badges and magnifying glasses.

What did I get? Not a naked salad. And let me tell you something about their dressings: EVERY SINGLE ONE OF THEM CONTAINS DAIRY. Even the balsamic vinaigrette. Most of them also contain eggs. And no, they don't offer oil and vinegar on the side. You either get the nasty secretion-filled dressings, or you get nada. Which is what happened to my cousin.

I was surprised to see that their vegetable sides were vegan as-is, so I ordered them both, specifying no butter or cheese, etc. just to be on the safe side. The two veggie sides are "steamed broccoli," and "sauteed vegetable medley." (Broccoli had no allergen symbols, and the "vegetable medley" only contained soy.) I received...

Don't get too excited now.

Like I said, I cared more about spending time with my cousin than feasting on some gorgeous platter of food, so it was no big deal. Plus, she and I bonded over our dietary no-nos.

SO, if you find yourself at TGI Fridays, or any other similar chain restaurant, ask for the allergen menu and marvel at the nothingness!

ACK! It's almost Thanksgiving! Hopefully you know what the heck you're gonna make/eat/serve, but if not, here's a quick round-up of vegan noms, from simple to elegant to downright sexy. I look forward to reading about everyone's Tofurky Day! (And yes, I will also be sharing my feast!)

Scroll down on this link for some classic Thanksgiving flavors with a raw vegan twist.

Listen, I've been vegan for most of my life now, but I was never a big fan of salads. It's hard to get excited about a bowl of leafy raw veggies when there are so many other awesome foods to eat! HOWEVER, these salads would give me a case of the good wiggles.

Forks and Beans always has such cutie patootie things on her blog. Check out her kid-friendly Thanksgiving recipes here. (It's totally not just for kids, though.)

Angela from Oh She Glows is such a classy dame. Check out her round-up of GORGEOUS holiday recipes, as well as some tips on having a stress-free holiday amongst meat-eaters.

Thanks, Vegetarian Times! How to Tackle a Squash. My preferred method? Get someone else to do it. 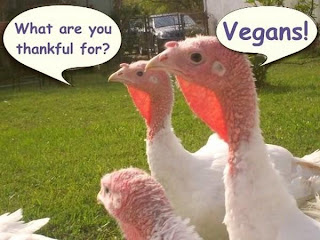 STOP EVERYTHING and someone please cook one of EVERYTHING off this round-up and send it my way! (Then ya best believe I'll be givin' thanks!)

Okay, food aside (just for a moment!), vegan warrior, Jenny Brown shares some tips on surviving Thanksgiving as a lone vegan.

Check out this new site from Mercy for Animals, Pardon A Turkey. Learn fun facts about turkeys, grab some yummy vegan recipes, and pledge to "pardon a turkey," and be entered to win some goodies from Tofurky, Field Roast, or gardein!

What are you serving up for Thanksgiving? Got some rockin' recipes? Share them in the comments!
Posted by Amanda J at 10:05 AM 9 comments 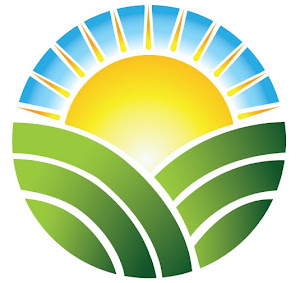 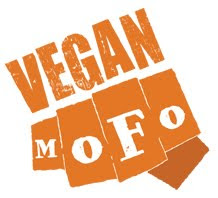